How does Electrum work?

Electrum’s focus is speed, with low resource usage and simplifying SmartCash. Startup times are instant because it operates in conjunction with high-performance servers that handle the most complicated parts of the SmartCash system.

Not really; the Electrum client never sends private keys to the servers. In addition, it verifies the information reported by servers, using a technique called Simple Payment Verification

Simple Payment Verification (SPV) is a technique described in Satoshi Nakamoto’s paper. SPV allows a lightweight client to verify that a transaction is included in the SmartCash blockchain, without downloading the entire blockchain. The SPV client only needs download the block headers, which are much smaller than the full blocks. To verify that a transaction is in a block, a SPV client requests a proof of inclusion, in the form of a Merkle branch.

SPV clients offer more security than web wallets, because they do not need to trust the servers with the information they send.

What is the seed?

The seed is a random phrase that is used to generate your private keys.

Your wallet can be entirely recovered from its seed. For this, select the “restore wallet” option in the startup.

How secure is the seed?

The seed phrase created by Electrum has 132 bits of entropy. This means that it provides the same level of security as a SmartCash private key (of length 256 bits). Indeed, an elliptic curve key of length n provides n/2 bits of security.

I have forgotten my password. What can I do?

To restore your wallet from its seed phrase, create a new wallet, select the type, choose “I already have a seed” and proceed to input your seed phrase.

My transaction has been unconfirmed for a long time. What can I do?

SmartCash transactions become “confirmed” when miners accept to write them in the SmartCash blockchain. In general, the speed of confirmation depends on the fee you attach to your transaction; miners prioritize transactions that pay the highest fees.

If you have made a transaction that is unconfirmed, you can:

What does it mean to “freeze” an address in Electrum?

When you freeze an address, the funds in that address will not be used for sending SmartCash. You cannot send SmartCash if you don’t have enough funds in the non-frozen addresses.

How is the wallet encrypted?

Wallet file encryption is activated by default since version 2.8. It is intended to protect your privacy, but also to prevent you from requesting SmartCash on a wallet that you do not control.

Can I import private keys from other SmartCash clients?

In Electrum 3.x, you cannot import private keys in a wallet that has a seed. You should sweep them instead. 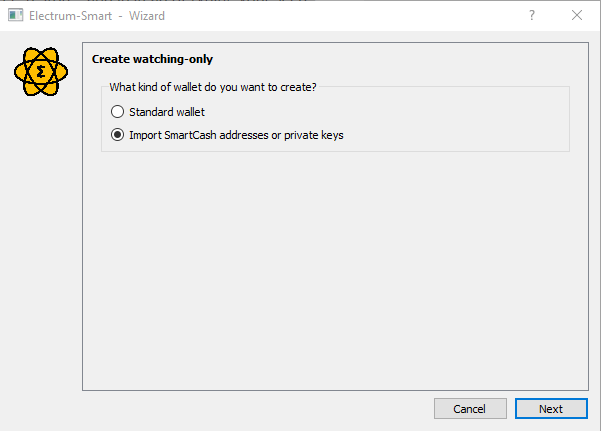 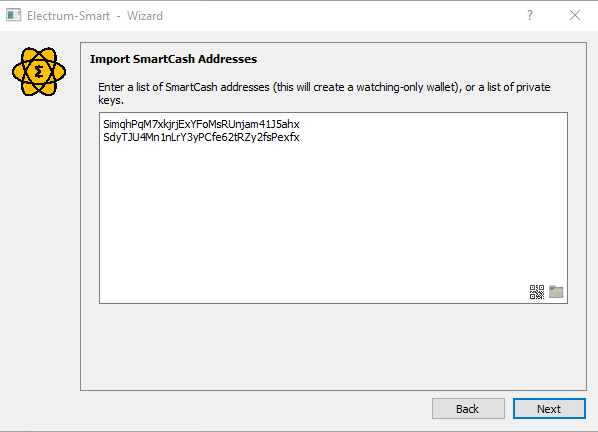 You will need to back up this wallet, because it cannot be recovered from a seed.

Can I sweep private keys from other SmartCash clients?

To sweep private keys, go to the Wallet menu -> Private Keys -> Sweep. Enter the private keys in the appropriate field. Leave the “Address” field unchanged. That is the destination address and it will be from your existing electrum wallet. Click on “Sweep”. It’ll now take you to the send tab where you can set an appropriate fee and then click on “Send” to send the coins to your wallet.

Where is my wallet file located?

The default wallet file is called default_wallet, which is created when you first run the application and is located in the /wallets folder.

Can I do bulk payments with Electrum?

You can create a transaction with several outputs. In the GUI, type each address and amount on a line, separated by a comma. 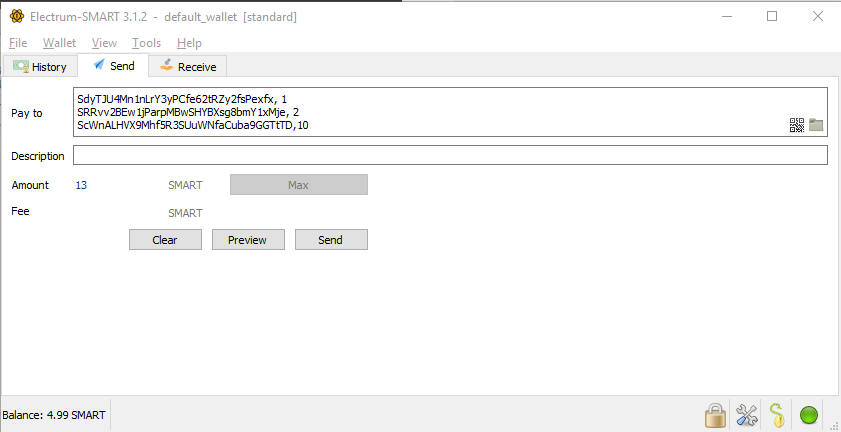 Amounts are in the current unit set in the client. The total is shown in the GUI.

You can also import a CSV file in the “Pay to” field, by clicking on the folder icon.

Electrum lets you create and sign raw transactions right from the user interface using a form.

Electrum freezes when I try to send SmartCash.

This might happen if you are trying to spend a large number of transaction outputs (for example, if you have collected hundreds of donations from a SmartCash mining process). When you send SmartCash, Electrum looks for unspent coins that are in your wallet in order to create a new transaction. Unspent coins can have different values, much like physical coins and bills.

If this happens, you should consolidate your transaction inputs by sending smaller amounts of SmartCash to one of your wallet addresses; this would be the equivalent of exchanging a stack of nickels for a dollar bill.

What is the gap limit?

How can I pre-generate new addresses?

Electrum will generate new addresses as you use them, until it hits the gap limit.

If you need to pre-generate more addresses, you can do so by typing wallet.create_new_address(False) in the console. This command will generate one new address. Note that the address will be shown with a red background in the address tab to indicate that it is beyond the gap limit. The red color will remain until the gap is filled.

WARNING: Addresses beyond the gap limit will not automatically be recovered from the seed. To recover them will require either increasing the client’s gap limit or generating new addresses until the used addresses are found.

If you wish to generate more than one address, you can use a “for” loop. For example, if you wanted to generate 50 addresses, you could do this:

How do I upgrade Electrum?

Warning: always save your wallet seed on paper before doing an upgrade.

To upgrade Electrum, just install the most recent version. The way to do this will depend on your OS.

Note that your wallet files are stored separately from the software, so you can safely remove the old version of the software if your OS does not do it for you.

Some Electrum upgrades will modify the format of your wallet files.

For this reason, it is not recommended to downgrade Electrum to an older version once you have opened your wallet file with the new version. The older version will not always be able to read the new wallet file.

H
Hoang is the author of this solution article.

Did you find it helpful? Yes No

Send feedback
Sorry we couldn't be helpful. Help us improve this article with your feedback.